Darrin Rose is one of Canada’s most popular comedians. The host of Match Game on the Comedy Network, Darrin is also known as Bill the bartender on the CBC sitcom Mr. D. He has appeared twice on the Late Late Show with Craig Ferguson on CBS, and has been called “one of the hottest comedians in Canada” by GQ magazine.

Corporate Entertainment
Darrin delivers stand-up comedy as the entertainment portion of events.
Host/MC
Need a funny emcee for your event? An acclaimed comedian, Darrin will keep your crowd laughing and make your event memorable.

Darrin has appeared seven times at the Just For Laughs festival. Darrin won a Canadian Comedy Award for Best Live Performance for his appearance on Just for Laughs in 2014, and has been nominated another eight times including Best Stand-Up Comic in 2011 and 2016. His half hour stand-up special, broadcast on CTV, was nominated for a Canadian Screen Award for Best Performance in a Comedy Series.

In 2016, he was nominated for a second Canadian Screen Award as Best Supporting Actor for his role on Mr. D. Darrin has contributed humour articles to the National Post, and won a Canadian Screenwriting Award in 2012, following nominations in 2009 and 2010. His one man show, What’s Potpourri?, was selected Best of the Fest at the Edinburgh Comedy Festival. In 2016, Darrin appeared in his first movie role, in Disney’s The Swap. He was a regular on MuchMusic’s hit show Video On Trial. Darrin tours internationally as a stand-up comedian, including at the MGM Grand in Las Vegas; Hong Kong, Singapore, Ireland, Mexico, the United Kingdom, the United States and Canada.

Darrin has performed stand-up or hosted corporate events for Bell Media, Loblaw’s, ON-X, Investor’s Group, the Canadian Media Director’s Council, the Kipling Group, Medavie Blue Cross, and many others. He has hosted award shows such as the Canadian Screen Awards, the KIRA Awards, the Canadian Cable System’s Tuned In Canada Awards, The Crystals Radio Awards at Canadian Music Week, and the Bell Aliant CEO Excellence Awards. Darrin has made countless media appearances. 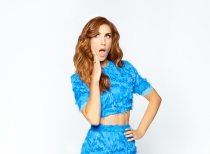