Sami Jo Small is a 3 time Olympian in the sport of Ice Hockey. She has won 2 gold and a silver as a goaltender representing Canada. A Certified Speaking Professional (CSP) and a graduate of Stanford University in Mechanical Engineering, she has been a professional speaker for more than 25 years. She uses storytelling to exemplify many aspects of developing more successful teams and leave the audience with concrete ways to support the people and the teams around them through her message that, “In life, we don’t always get to choose the role we play, but we always get to choose how we play it. She also recently published her first book, a best-selling memoir, The Role I Played – Canada’s Greatest Olympic Hockey Team and launched her new Podcast, “Sami Jo’s Podcast” on the Sport Illustrated/Hockey News platform.

It's not about the Medal

Sami Jo uses storytelling to show audiences how to develop more successful teams and leaves participants with concrete ways to support the people and the teams around them.

In often changing business environments, she’ll show audiences how to stay the course and how to focus on the big picture while still taking care of details. Through unique stories of perseverance and drive, she encourages audiences not only seek out advice from others, but to also share their knowledge and expertise as mentors.

Sami Jo will share stories from her life to demonstrate that we all have value in various different ways and are all capable of contributing and finding value.

Sami Jo is married to one of Canada’s most successful Paralympians, Billy Bridges. He just recently returned from his 6th Paralympic Games in Beijing.

Speaking together, they offer a unique take on teamwork sharing different perspectives on the same goals. As the all time leader in points in all the world in the sport of sledge hockey, Billy adds a unique perspective. Growing up with Spina Bifida and being in a wheelchair has meant he has had to overcome many obstacles in pursuit of his goals.

Through her keynote address, Sami Jo focuses on helping the individuals in the crowd to be motivated and inspired to help those around them. She’ll show your group how to become a better “team”, whether that’s in the workplace, at home, or in relationships. She’ll also  inspire your team to want to work harder for a common goal.

This keynote is great for groups from all industries; Sami Jo has experience working with many diverse groups over her speaking career.

Focuses on helping you help the individuals in the crowd be motivated and inspired to help those around them. She’ll help your group become a better “team”, whether that’s in the workplace, at home or in relationships, and inspire the group to want to work harder for a common goal.

Sami Jo Small grew up on the outdoor hockey rinks of Winnipeg, MB. Her passion for the game was honed in the boys minor hockey system. As the only girl she was forced each and every day to prove that she belonged through hard work and determination. She dreamt, like her teammates, of someday playing in the NHL, but also dreamt of someday stepping on to the podium at the Olympic Games. She accepted a scholarship to Stanford University for track and field to throw the discus and javelin.

Her dream of participating in the Olympic Games flourished until injury plagued her career and she consoled her feelings of failure by returning to the game she grew up loving. Hockey became her passion again as she played on the Stanford Men’s team even garnering PAC-10 MVP honours while earning her degree in mechanical engineering.

Her childhood dream became a reality when she accepted a spot on the 1998 Olympic Games team traveling to Nagano, Japan. Women’s hockey was on the rise and Sami Jo was a huge part of its success. She has since won five World Championships and has twice been named Championship MVP. She is a three time Olympian and has been a member of two Olympic Gold Medal Winning teams including Torino, Italy.

Sami Jo has been speaking professionally since she started with the National Team in 1997. She’s earned the highest designation as a speaking professional, the CSP (Certified Speaking professional) in which there are only just over 500 worldwide and only a handful of former athletes. When many of her teammates shied away from the microphone, Sami Jo was quick to share stories about the team. She has honed her message about teamwork after more than 20 years in the industry using stories from one of Canada’s most successful teams, the Canadian Women’s Hockey Team. With her learnings she has shown audiences all over the world that, “we don’t always get to choose the role we play, but we always get to choose how to play it.” 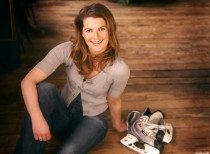