Charmaine Crooks is a Member of the Order of Canada, Five time Olympian, and Olympic Silver medalist (LA ’84 Athletics) who has been an integral part of Canadian and global sport as a leader, innovator and advocate.

Charmaine Crooks in the media January 1, 2020

Never Give Up! A Story of Perseverance & Passion

Achieving award-winning performances… on the field and in the office

At the Atlanta Centennial Olympic Games where she was Team Canada Opening Ceremony flagbearer, she was part of the first group of active Athletes elected by peers to the International Olympic Committee as voting members. There she served on the IOC Press Commission, IOC Culture and Education Commission, New Media working group, IOC 2000 Reform Commission, founding IOC Ethics Commission and the World Anti-Doping Agency. She was also appointed founding Chair of the PASO Athletes Commission and was elected Vice President of the World Olympians Association.

As one of the members of the 2010 Olympic Winter and Paralympic Winter Games (Vanoc), Charmaine was the only director to serve from the initial bid phase through to the successful end of the Games.

Her volunteer leadership in sport includes roles on the Canadian Olympic Committee, Canadian Soccer Association executive board and the Organising Committee for FIFA Competitions. She’s also been director on several charitable and public sector Boards in a variety of sectors including technology, finance, sport and health.

She co-founded the 365 International Sport Foundation, dedicated to bringing communities together through sport. This includes the creation of Our Cityride, a mass participation sport for all cycling ride & Festival. Globally, she is a Champion for Peace with Peace and Sport. 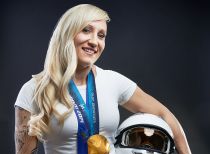