Madame Gandhi, aka Kiran, is a musician and activist. In 2020, she joined Oprah on tour in 2020 and was invited to be a TED Fellow. Having gained recognition as the former drummer for artist M.I.A., and as the viral free-bleeding runner at the 2015 London Marathon, Madame Gandhi now produces music that elevates and celebrates the female voice. A sought after speaker for all audiences, her storytelling and performances hit on themes of empowerment, gender equality, and wellness. As an influencer, she has partnered with brands like Adidas and The North Face, and is a strong supporter of the “The Future Is Female” slogan – which is all about arriving at a time when femininity is as desirable as masculinity.

Virtual Keynotes & Webinars
Contact us for more information about this speaker & their virtual presentations. Click here for some of the most popular formats for virtual events.
Atomic Living

‘Atomic Living’ is a way to use spontaneity as a productive way to move forward and make decisions in life. While balancing the pursuit of her Harvard MBA, touring as a drummer for musician M.I.A. and managing her own music career, Kiran has used this mindset to help bring success to her life. Instead of creating a 5 or 10 year plan, Atomic Living prioritizes knowing what matters to you most and accommodating various moments and opportunities in life. Feelings of chaos, pressure, and regret will be reduced while new opportunities become more manageable. Drawing on examples from her experiences, Kiran leads others to identify their core passions and establish pillars to help guide decision-making and the pursue of goals. Should you change your major or career path? Do you need to attend that social event all your friends are going to? Can you take on that new project right now? This presentation will teach you how to navigate through atomic moments and make choices that lead to greater success and wellness.

Long before #MeToo, conversations about women’s sexuality have been weighed down by tragedy, fear, and shame. Kiran believes in using sex positivity as a tool to change this narrative and begin to overcome pain with empowerment. To make space for more positive experiences we need to talk more about pleasure and empower women to reject shame, feel powerful in their bodies, and prioritize their own comfort. As part of Kiran’s mission towards gender equality, this presentation addresses consent, sex positivity, creating safe spaces, and how we can all work together to shift the culture.

Wellness
From quieting out the noise to relying on community care, Kiran shares how she has coped with imposter syndrome, burnout, harassment, social pressures, and other barriers to mental wellness throughout her life. Inspiring others through sharing her own experience, Kiran gives tangible advice for how to find your path towards wellness and mindfulness

From quieting out the noise to relying on community care, Kiran shares how she has coped with imposter syndrome, burnout, harassment, social pressures, and other barriers to mental wellness throughout her life. Inspiring others through sharing her own experience, Kiran gives tangible advice for how to find your path towards wellness and mindfulness

Celebrity Partnerships
As an influencer, Madame Gandhi has partnered with brands like Adidas and The North Face, to promote “The Future Is Female” slogan - which is all about arriving at a time when femininity is as desirable as masculinity.

In 2020, she joined Oprah on tour in 2020, was invited to be a TED Fellow and has actively been engaged with her supporters on social media, finding new ways to share her music and messages in the virtual world.

Kiran holds a Bachelor’s Degree in Mathematics, Political Science and Women’s Studies from Georgetown (COL ’11) and an MBA from Harvard Business School (2015), and has used her degrees to run her own musical project as well as advise music companies Spotify, Stem, Bonnaroo and D’addario. Between 2011-2013, Kiran worked at Interscope Records for two years as their first ever digital analyst, studying patterns in Spotify and YouTube consumption behavior.

In 2015, she ran the London Marathon free-bleeding to combat period stigma around the world, sparking a global viral conversation about how we treat menstruation in various cultures. She now travels often to perform and speak about modern gender equality, and is also working on her full-length album. Madame Gandhi’s mission is to elevate and celebrate the female voice.

Kiran grew up between New York City and Bombay, India, playing drums and attending The Chapin School. She graduated from Georgetown University in 2011 with a double major in mathematics and political science and a minor in women’s studies.

Upon graduation, she landed a job in Los Angeles as Interscope Records’s first-ever digital analyst. Combining her passion for mathematics and music, her job was to understand music consumption patterns on Spotify and YouTube, predict sales trends based on these new volume metrics and create an internal system for how the label could understand the success of an artist online.

In 2013, Kiran linked up with Grammy-nominated artist M.I.A. and began touring internationally with her as her drummer all across North America, Europe, Asia and Latin America. That same year, Kiran was also accepted to Harvard Business School’s M.B.A. program, and so when she began school in the fall in Boston, was still touring simultaneously with M.I.A. Kiran’s TEDx talk on “Atomic Living” embodies her belief that by knowing and protecting the things that matter to you most, life’s toughest choices become easier to navigate.

As an activist, Kiran uses her voice, music and written work to empower her audiences to be their best and authentic selves. She believes wholeheartedly in the idea that we must strive to live in a world that is “linked and not ranked”, in which each person has something unique to contribute to one another, and therefore we must equip each person with the environment they need to access their fullest potential. Kiran has partnered with various menstrual health organizations to improve women’s access to affordable and safe menstrual care. She speaks often about how menstruation taboo affects women and girls daily around the world, and was part of the early round table discussions that lead to the elimination of the “luxury tax” on tampons in her home city of New York.

Upon releasing her first-ever electrofeminist solo EP called Voices, Madame Gandhi now tours full-time as a speaker and musician and is working on her next album. 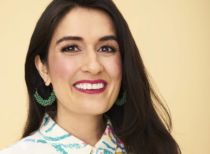